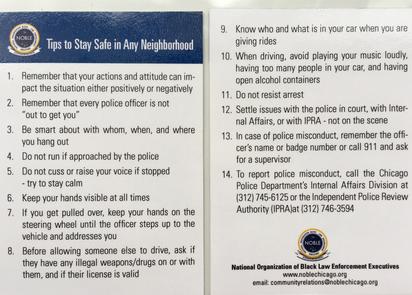 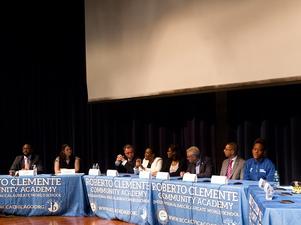 ​"The Law & Your Community"

After the events in Ferguson, Baltimore, and more recently in Baton Rouge and Falcon Heights, Minnesota, and across the nation, the curriculum took on a secondary purpose. Churches, after-school programs, and other organizations have been seeking out NOBLE's "The Law & Your Community" in their attempt to educate their young people on how to safely interact with law enforcement during an encounter. Out of those sessions and conversations, our chapter created the "Tips to Stay Safe in Any Neighborhood" palm cards as many community members responded to the information during our sessions with "I wish I could have this information on me so I can pass it on to others." This palm card has since been adopted by the Chicago Police Department as well as other police departments and municipalities.

Our chapter has expanded this curriculum to a third purpose. Because this curriculum is primarily taught by law enforcement officers, this program has become an effective and efficient tool and forum where all members of our community, whether they wear the badge or not, come together and have candid and honest dialogue about the tension and mistrust between the civilian, and mostly minority communities and law enforcement. The program has fostered a commitment to seek solutions to move our communities and this nation forward and to a place where the legitimacy of law enforcement and the relationship between the police and the community  are restored and we can come together as one "village," one community to reestablish peace in our neighborhoods.

In order to reach our younger community members, our chapter has created a "Stronger Together" initiative through which we organize entertaining social events or neighborhood efforts in order to bring youth and law enforcement together in a non-confrontational and fun atmosphere.

The goals of the program are for the Participant to

"The Law & Your Community" program uses different interaction methods such as role reversal skits, interactive scenarios, PowerPoint slides, videos, and vignettes providing informed discussion by the community and law enforcement officers. The curriculum provides a base of information and resources which has been and can be adapted to each region in the nation or even a particular part of a city as each community faces different challenges and factors that have to be taken into account during these conversations.

The program is broken down into three (3) modules:

The "Tips to Stay Safe in Any Neighborhood" palm cards are available in English and in Spanish.

In order to track whether "The Law & Your Community" does in fact aid in changing the attitudes and opinions community members, especially adolescents, have of law enforcement, our chapter has devised a survey to measure those sentiments. Participants of the curriculum are asked to take the survey before they start our program as well as at its conclusion.

Since the beginning of 2015, our chapter has facilitated the program either as a 2-hour presentation/town hall or as a 10 to 12-session program in public schools numerous times in schools, churches, community town halls, and other events in the Chicago metropolitan area. Some of those events included:

​On June 24, 2015, Mayor Rahm Emmanuel announced a partnership between NOBLE and the Chicago Public Schools for the summer of 2015 during which "The Law & Your Community" was to be taught at three different schools and then expanded to more Chicago schools in the fall. To read the press release, click here. Our chapter facilitated the program at Ryder Elementary, Spencer Academy, and Sherwood Elementary.

​During the listening tours over the summer of 2015, Superintendent McCarthy announced that the Chicago Police Department would work closely with NOBLE to train its officers in this program. Other departments such as the South Holland Police Department in collaboration with Thornton Township as well as the Evanston Police Department have also initiated the same path and are planning on rolling the program out in their respective school systems this year.

Additionally, both local and national media have also covered our program in the press as well as television.

If you would like to request more information about the program or request "The Law & Your Community" at your school, organization, or community event, please email Mrs. Carla Kupe-Arion, Esq., Director of Community Relations, at communityrelations@noblechicago.org.